Expert of the Maidan of Foreign Affairs Yurii Smelyanski in his study "Crimea: conflict status, current situation and perspectives" debates the aims and means of Russian policy in occupied Crimea and finds that it is focused only on exploitation and militarization.

3) These militia act as a cover for Russian Army Special Forces. The latter capture administrative buildings and block Ukrainian Army units at their locations.

4) Pseudo-governments form up. They step in, controling the captured territories. In Crimea, these pseudo-governments imitated the "will of the people". Therefore, the aggressor decided to invade.

In fact, the annexation of Crimea has become the first case of invasion in Europe since the World War II, as Kremlin tried to reach its imperial ambitions. This is the seriously dangerous for the current post-Cold-War world state. 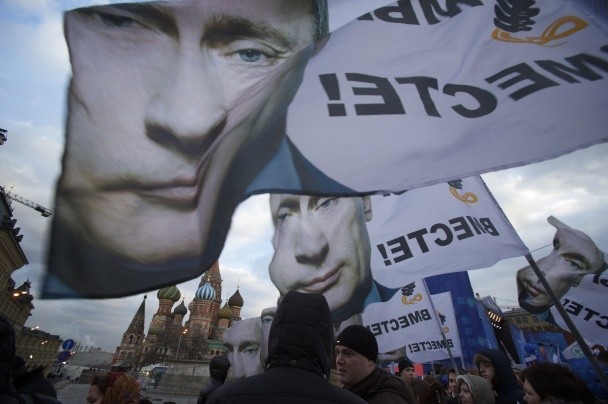 At the beginning of the occupation residents were

Quality of life and quality of government were the hooks, used by occupants to lure the minds of Crimean residents.

As a result, residents of Crimea

Since the beginning of the occupation, Crimea has been going through several phases:

Dictionaries define "colonization" as "the process of development and population of the new territories". For Russia Crimea is new territory, not recognized by international community. 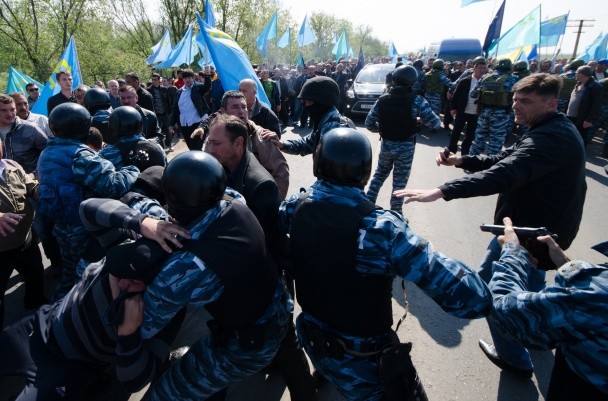 Trying to create and develop its colony in Crimea, Russia wants to achieve several goals:

1) Be able to build shorter and cheaper pipeline for gas and oil transit, and with that – be able to further monopolize European gas market

2) Take under control main naval communications, cutting Ukraine from them. Create constant threat for safety of the Ukrainian sea line and southern regions. This would make it impossible for Ukraine to mine hydrocarbons from the Black Sea Shelf. Occupying Crimea, Russia creates an instrument of constant political pressure for the Ukraine in politics and economics.

3) Create an area of "self-realization" for criminally oriented part of Russian population, lessening the number of criminals in metropole (Russia).

6) Keep Russian military forces ready. During the Soviet period, Crimea has been turned into the "unsinkable missile carrier". This role is exactly what modern occupants are trying to recreate now. Remaking this "unsinkable carrier" for the purposes of piracy would be a major threat for the international community.

7) Relocating excess workforce to Russian regions that need it. To provide satisfactory life-support of the military base, there must be four civilians working for each single enlisted person (for example, a bus driver, a food vendor, a schoolteacher, so on). Therefore, the military group of 120 000 men needs 480-500 thousands of civilians to operate. Part of these civilians would be family members of the militants. Even if you double the number of required civilians for the Crimean military group, the number will not exceed one million. From the rational economy point of view, the rest of Crimean population is not needed on the peninsula. They are unwanted.

8) Create a base for trying out new technologies, methods and tactics – both civilian and military. It is an opportunity to conduct risky experiments in total secrecy from the Russian population and international community.

9) Achieve own geostrategic interests by making army more mobile. Occupation of the Crimea creates a constant threat to security of the NATO states, southern Europe, Caucasus in the Black Sea basin, other countries that have exit to Mediterranean Sea and Persian Gulf.

10) Be able to control the movement of military forces and fleets in the Black sea and partly in Mediterranean region.

11) Build up the prestige of the country (as it is seen by Kremlin chiefs and most of the Russian populace), gaining some geopolitical weight – it can be useful while debating over international agreements or fates of the world.

12) Gain civilizational, linguistic and cultural expansion, and by that -reinforce authoritarianism and legitimacy of the current Russian regime.

13) Try to force Russian standards on, at least, part of the world – and thus to make them acceptable to the world. 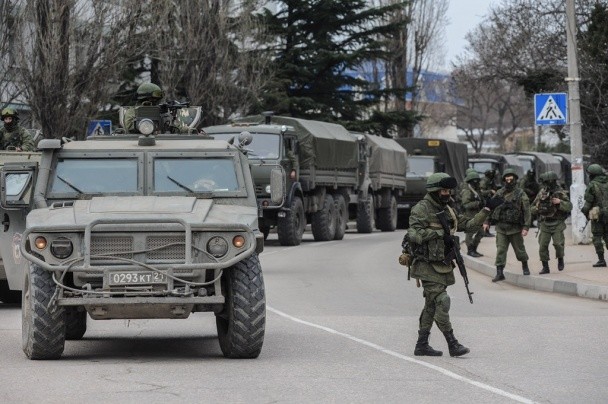 This makes the colonization of the occupied Crimea evident:

1) Crimea is geographically separated from the Russian Federation

2) Economical exploitation is carried out in Crimea.  Natural resources are being destroyed. Economic development is slowing down. Actually, Crimea is being debased. For example, the number of jobs since the start of the occupation fell down by 25%. By the January 1st 2014 there were 1050 thousands jobs in Crimea (Sevastopol included). After two years of occupation this number shortened by 250 000 jobs – by conservative estimates. Moreover, the process of jobs shortening still goes on.

3) Ethnically and culturally, Crimea residents are different from the Russian citizens. After two years of the occupation all Crimean residents, who remained Ukrainian citizens, are seen as disloyal by occupational government. As a result, at the peninsula there are triple more secret services agents per capita, than in other parts of Russia.

4) Crimean territory was seized and occupied by Russia.

5) Using military forces, Russia installed in Crimea a puppet government, dependent on central power. This government was created from the local political power, which never had enough electoral support from the population before.

6) Ignoring the position of the international community, Russia decided to annex the occupied Crimean territory. And still forming its colonial administration there.

7) The number of migrants to Crimea from the other parts of Russia constantly increases. These migrants get jobs at the local administrations, becoming new political, business and cultural elites of the peninsula.

8) Russian government tries to use the fate of Crimea for negotiations – as a price for stopping aggression at the Eastern part of Ukraine.

9) Systematical discrimination of Ukrainians and Crimean tartars goes on in the occupied Crimea. Practically every religion is under pressure too. The only exception is Orthodox Church of the Moscow patriarchate.

10) Comparing their life before and after annexation, the majority of Crimean residents claim they wish things to improve but see them deteriorating. The idea of "it was better back in Ukraine" steadily becomes more popular.

11) Reacting to that, Crimean occupational government tightens repressions. They try to suppress increasing discontent. Their methods are crude, such as intimidation, total control of telephone calls and internet communication, brainwashing through the controlled media, accusations, separation of certain groups of citizens on ethnic or religious grounds. 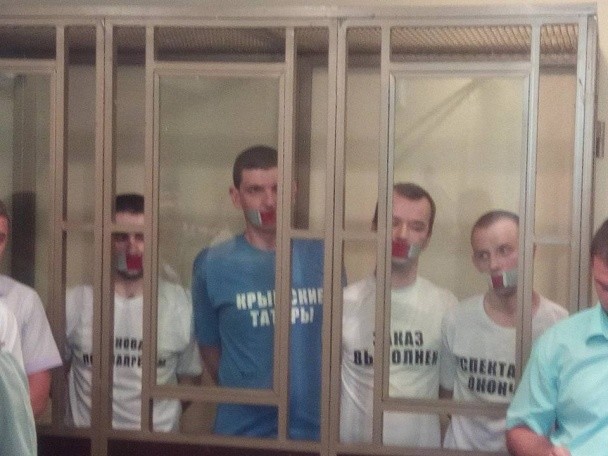 Modern science defines several different types of colonies (such as settler colony, resources colony, mixed colony). We suggest that in Crimea, Russia tries to create an archaic – strategic military colony. This type includes features of the other types. The only thing Russia develops in Crimea is military bases. For the last 30 months systematic militarization of Crimean peninsula takes place.

The key trends affecting the development of the situation in Crimea are as follows:

1. The main priority is developing the territory as the military base.

- Posing a threat to security of the Black Sea region, also to EU and NATO states (Bulgaria, Romania, Turkey), changing the military balance, in particular within the frames of the Agreement on Conventional Armed Forces in Europe. In addition, possibly, within the frames of the agreements on the strategic nuclear weapons control. Persistent military threat for the Ukrainian southern seacoast, aiming to set up the land corridor between Russian federation, Crimea and Transnistria. Militarization of the whole region, expansion of the Russian military presence in Syria, and, as a result – new wave of armed confrontation in that country.

- Intensification of the "forced loyalty" policy on the Crimean residents. This will lead to further deterioration of human rights, strengthening control over media

- New attempts to accelerate the strategical infrastructural projects - like the Kerch Bridge, the energy bridge or the gas pipeline (to include Crimea into the Russian energy systems)

- Thus, necessity to increase the supply of construction materials and equipment (like metal, timber, gravel). This will lead to intensified road usage and increased usage of local natural resources. As a result, an ecological disaster in some areas of Crimea

- The quantity of small and medium businesses will decline (the priority goes to the development of the big business, mainly defense sector). Increasing unemployment. Less taxes from the region. Growing dependence on the direct financing from the federal budget. Redirection of the federal financial flaws. Less money for other regions of Russia. Concealed contradictions and competition for budgets among different regions of Russian federation.

- Continued attempts of excessive use of infrastructure and natural resources, worsening ecological situation – climate change, loss of underground fresh water deposits, lower fertility, worsening quality of agricultural lands, gradual lessening of their area. As a result – lowering of the Crimea's ability to feed itself.

3. Continued trend for resettlement of the population, simultaneous degrading of the democracy institutes, human rights and freedoms. Growing corruption and criminalization of the daily life.

Ukraine should gradually expand the policy of blocking the peninsula, trying to create the enforcement mechanisms in order to engage Russia into dialogue about the occupation of this territory. Also – create mechanisms of communication with Crimean population (channels of communication, definition of legal status, creating opportunities to realize person's rights and interests on Ukrainian territory, definition of the status for self-governing bodies of the Crimean tartars and supporting their activities). Ukraine should create complete and gradually realizing Strategy of de-occupation and reintegration for the peninsula.