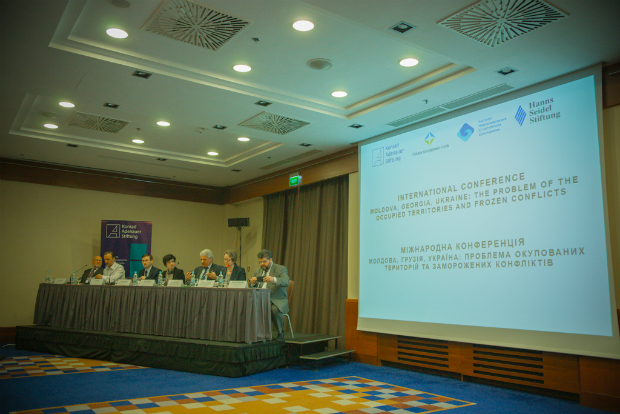 On November 25, 2015, the Maidan of Foreign Affairs Foundation in partnership with the Institute of Strategic Black Sea Studies and financial support from the Konrad Adenauer and Hanns Seidel Foundation, organized an international conference: Moldova, Georgia, Ukraine: the Problem of the Occupied Territories and Frozen Conflicts. The event held in Kyiv was attended by over 100 people, including representatives of the foreign ministries and public organizations of Moldova and Georgia, representatives of the non-governmental sector and Ukrainian think tanks and journalists specializing in international and security issues.

The conference showed that despite the differences in the causes of the conflicts, their course and the attempted diplomatic mechanisms of resolution, they have a lot common, specifically, the source of the problem. Undoubtedly, the main threat to peace, stability and security of the region is the imperial ambitions of the Kremlin. Today, theories of conspiracy and controlled chaos are firmly rooted in the "political unconscious" of the Kremlin elite and Russian general public. Their interpretation of modern history, including the causes and the process of the Soviet Union’s disintegration, does not allow for any explanations other than it being the result of the "subversive Western policies." Also, the European vector of the post-Soviet countries and the integration of some of them into NATO are perceived as a territorial assault on the "primordial Russian lands". So, in the attempt to counter the "global conspiracy" of the West, while lacking the compatible resources, the Kremlin strategists create and use frozen conflicts as tools of realizing the "national interests”, specifically -- spreading its influence on the post-Soviet countries.

The important factors that contribute to the success of such policies is the common for the post-Soviet countries culture of corruption, organized crime, lack of the efficient political elites in the states-objects of the Russian aggression, their unbalanced ethnic and social policy and the gaps in the formation of a unified nation, particularly in areas populated by ethnic Russians, that are thus, filled by the massive Russian propaganda and subversive ideology akin to that of the "Russian world". At the same time, the Kremlin fully realizes the impossibility of the international recognition of these "black holes" turned conflict zones, as well as its own inability to provide a decent standard of living there, which makes residents of the uncontrolled and unrecognized entities doomed to be completely dependent on Moscow and de-facto, its hostages. The latest of them, in Crimea and Eastern Ukraine, are just two more vivid examples of that.

The outbreak of terrorism in Europe, the war in the Middle East, and especially, the annexation of Crimea and Russia's military aggression in Donbas, have created a new international reality that requires joint effort in rethinking approaches to ending the so-called "frozen conflicts". Experts agree that the current situation when the three countries with such conflicts, all of which have one source, have no active interaction with each other is abnormal. Clearly, there is an urgent need to join efforts on the issue both at the government level and among the think tanks and civil society organizations of Ukraine, Moldova and Georgia. The latter can not only provide analyses, ideas and concrete advice to the official structures, but possibly also implement joint civil society projects that could contribute to ending the conflicts in these three states. For instance, a good start would be to prepare an exhaustive evidence base of the Russian Federation’s role in igniting the respective conflicts and in blocking the attempts to resolve them.

Such interaction could become a basis for creating a new advisory “3+2” format -- Ukraine, Georgia, Moldova, US and EU -- that would coordinate action in putting pressure on Russia, guarantee the policy of international “non-recognition” of the conflict areas and in the future, possibly end the conflicts. The "3 + 2" format could also be used to implement projects aimed at creating and/or supporting the civil society in the temporarily occupied territories and “frozen conflict” zones.

Together with foreign partners, the three states could also establish unique platforms for working on the Russia issues within the UN, OSCE and other international organizations. And it is crucial that the civil society, especially the human rights activists, become an integral part of all the negotiating formats and international forums that the official state delegations take part in, since, at present, the non-government representatives have confirmed that their respective state institutions largely ignore the opinion of the civil society and do not use its potential. In addition to the "conflict themes", the three countries should jointly and systematically raise and discuss the issue of the human rights violations by Russia both in the areas of the foreign states that it currently controls and within the Russian Federation itself.

Given Ukraine’s recent election as a non-permanent member of the UN Security Council, the official Kyiv could put on the agenda the issues and draft resolutions related to the "frozen conflicts" and do so on behalf of all the three states. Another important project could be finding an international legal solution to the problem of monitoring human rights in the self-proclaimed republics, access of the international humanitarian and human rights organizations to those areas and setting into motion a mechanism of sanctions against the countries that violate human rights and block their enforcement in the territory of others.

The Ukrainian Ministry of Foreign Affairs should urgently introduce ongoing monitoring and publication of the human rights violations in the annexed Crimea and the temporarily occupied territories of Donbas. Since Russia and its proxies use common practices of violating the rights and freedoms of the people in the territories controlled by Moscow, it would be appropriate to combine all the facts of violations in Transnistria, South Ossetia, Abkhazia and Nagornyi Karabakh, with the information on the human rights situation in Russia itself, in one report.

Considering that the annexed Crimea was used by the RF for terrorist training and also the fact that the so-called leaders of the law enforcement agencies of the Transnistrian region of the Republic of Moldova have taken part in the terrorist activities on the territory of Ukraine, it seems timely to raise a question of introducing separate sanctions for supporting terrorism. However, the existing status-quo when the so-called "DNR" and "LNR" are not legally considered terrorist organizations significantly complicates the international implementation of this initiative.

Taking into account that corruption and organized crime are among Russia’s key tools in undermining the statehood of the countries-object of aggression, as well as keeping its puppet regimes there afloat, addressing that problem should become a major focus of the conflict resolution efforts.

The conference emphasized that all these initiatives can be fruitful only if approached by clear and firm international partnerships. For instance, since all of the three nations strive to become the EU members, it makes sense for them to coordinate their efforts to develop the "frozen conflicts" resolution mechanisms within the Eastern Partnership. Another logical and desirable step would be to also involve in the partnership Poland, Romania and the Baltic States, all of whom are legitimately concerned with the potential Russian aggression, due to the existence of the “Russian enclaves” on their territories.

Overall, the conference results clearly indicate both the urgent need for a united effort by the governments and civil societies of the states who face the occupied territories and "frozen conflicts" problem, and a huge untapped potential in that area. Learning the lessons from the hot phase of the conflicts and Russia’s latent role in the processes that follow, developing a unified position and coordinating steps in the international arena are the critical elements of ending such conflicts and preventing them in the future.

Economics and temporarily occupied territories studies expert, Chair of the Executive Board of the ​Black Sea Institute of Strategic Studies Publications